Is rear facing safe when you're rear ended?

That is a question that gets asked alot when we try to explain the benefits of rear facing. I'm sure you've read my post about Anne's crash. Well, now I'm going to tell you about Rachel's crash. 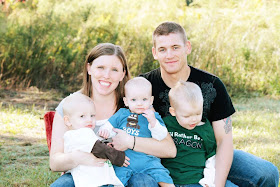 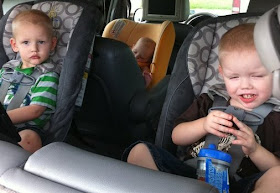 They were on the highway and saw traffic had stopped ahead because of a crash. As any attentive driver would do, they slowed to a stop. Unfortunately, the tractor trailer behind them didn't have time to stop. He swerved onto the shoulder to avoid hitting the Sienna in front of him. When he swerved, he jackknifed and the trailer hit the Sienna at an estimated 50mph. 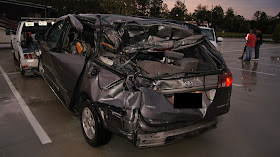 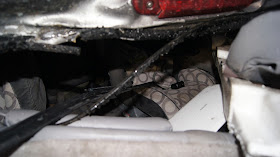 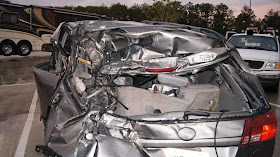 See the vehicle headrest sticking out of the back window? That is the 3rd row center seat. T2 was sitting on the driver's side. See how smashed in that is? T2 was rear facing, in a rear end collision. T2 had the ONLY injuries in the car. 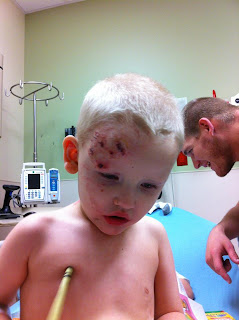 (ignore the crayon in his hand). He had 12 stitches in his forehead. The paramedics couldn't believe the child sitting there survived.

Rachel is not a Child Passenger Safety Technician. Rachel is a Mom that wants the best for her children. She knew to keep her children rear facing. She knew how to make sure she was using and installing her seats properly. What she did, saved her sons lives. All 3 boys were rear facing, and all 3 boys walked away from the crash. So my answer is yes, rear facing is still safe in a rear end collision. If you have any questions as to whether or not your carseat is used and/or installed properly, please visit a CPST and have it checked.

When you're involved in a crash, it is usually safest to leave the child buckled in their seat. The carseat acts like a built in body board, and the paramedics should try to remove the entire seat with child still in it. However, sometimes you need to remove the child. Rachel commented that she took the boys out of their seats for a few reasons.


"There was gas on the ground from another vehicle and they were terrified. They were screaming and trying to unbuckle and get out and I just... I couldn't leave them there. I couldn't leave T2 pinned to his seat with a hunk of metal in his face. Also we couldn't get the big boys seats out, I tried for a few seconds but gave up."


Rescuers were amazed that they all walked away. Here is another quote from Rachel:


"Yeah, I don't understand how we are all ok. Especially T2... every single person coming on scene thought they were dealing with at LEAST a medvac, if not a casualty. People didn't believe us when we told them the 2 year old I was holding that kept shrieking "I can't want a bandaid!!!!!" was the kid sitting there"

T2 is in the blue shirt in this picture. 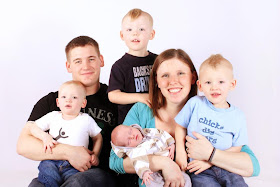 (Rachel was 7 months pregnant at the time of the crash)