"Rear to a year" right? WRONG! Rear facing to the limits of the seat is the safest way for children to ride. In 2002 the AAP said that 12 months and 20 pounds is the minimum children can be forward facing. However, many people don't realize they also said children should remain rearfacing until the limits of the seat.

What exactly are "the limits of the seat"? A carseat is outgrown rearfacing when the child only has 1 inch above their head, or they reach the maximum weight (which is 30, 33, or 35 pounds for all convertible seats).

There have no reports of children breaking their legs or hips because of rear facing. Unfortunately, there have been MANY reports of broken necks and deaths because of forward facing at a young age. My next blog will include 1 child's story.

This is a pic 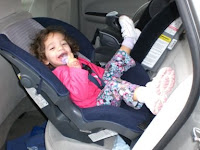 ture of my daughter rear facing at 25 months old. She will either bend her knees, cross her legs, prop them against the back of the seat, or throw them over the sides (as seen in this picture). All of those are safe to do. She does have her foot on another carseat in this picture, but when another child is in that seat, she keeps her foot in her own carseat.
Posted by CarseatNanny at 7:53 AM

Don't forget if the child's shoulders are over the top strap the seat is outgrown as well.

Woops forgot to say that's for forward facing in a convertible.

I didn't get to FF yet :) There's sooo much info I want to blog about. Just have to try and organize it a little :)