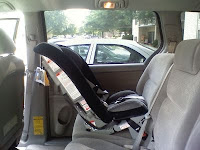 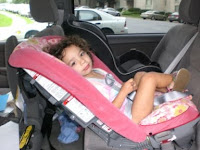 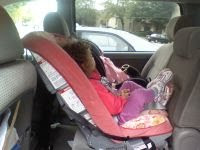 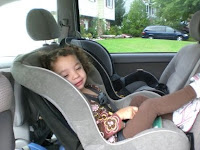 I WIN! Sofi now has a new carseat :) She looks like she has less legroom than in the Titan, but alot more room to grow heightwise.
Posted by CarseatNanny at 6:32 PM

Is it a Sienna? I'll have to put my radian back in mine for my youngest in May when I hand her SS1 down. The recline issue won't be such a big deal until she gets bigger, but I had a huge problem with it with my 2yo.

Yes, I have an 8 passenger 2008 Sienna. It's difficult, but it can be done. I think the old Radian boot works better outboard, but won't fit well center. But it's less than 45* now in the center :)

Ok. I have a 7 passenger, old boot. I'll have to try it this spring. Making mental note not to forget. Putting it on the hump part seems so counter intuitive!

It's not on the hump. If so, maybe only a tad. Your seats are the same as my outboard seats. The top left picture is actually the old boot RN outboard (I couldn't find the right pic of the center install). JUst make sure the boot is forward of the latch and it looks pretty good I think. Not too reclined.

Thank you! I'm moving ds2's CA to the back row temporarily this weekend because we have an out of town guest who will be more comfy in the captain's chair. So I may try the install just for fun to see if I can get it to work.

Hooray! I'm so glad you got it to work