Sofi in her many seats

I've been told I'm a carseat manufacturer's dream. A new seat comes out, and I want it. Well, that's true. So I though I'd post some pics of Sofi RF in her many seats. 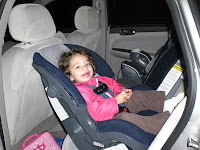 This is Sofi in the Britax Marathon. This picture was taken early spring 2009. This was her main carseat for awhile. When we needed to replace Grandma's carseat, I decide to give her this and get one with more legroom for the main carseat.

This is the Evenflo Triumph Advance. This picture was taken beginning of 2009. It's not my first choice of seats because of the knobs. But my husband has a hard time pulling a harness adjuster (an arm injury) so the knobs work well for him.

This is the Safety First Uptown. This picture taken April- May 2009. This is a backup seat, and is also used by my friend's daughter in my car. Sofi looked squashed in this seat, but she never complained. 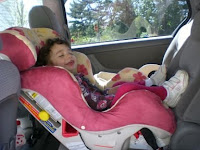 This is the First Years True Fit. Picture taken April or May 2009. It gives her much more legroom than the other seats. 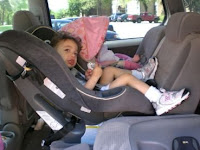 The new arrival, Graco My Ride 65. Picture taken May 2009. Sofi likes this seat because it has "pockets" (cup holders). I like it because it's easy to install, easy to adjust the harness, fairly lightweight to carry.

This is the Evenflo Titan Elite. Picture taken June 2009. We stopped using this seat last fall because I thought Sofi was too close to outgrowing it by height. I installed it to check again tonight, and she has a good 3 inches above her head (giving her 2 inches to grow).
Posted by CarseatNanny at 8:11 PM

{ls let me know what will be best a Britax Marathon or a Britax Boulevard, it is true that the Boulevard will bother the view of the baby, but with the Marathon he will sleep weel or his head will fall?